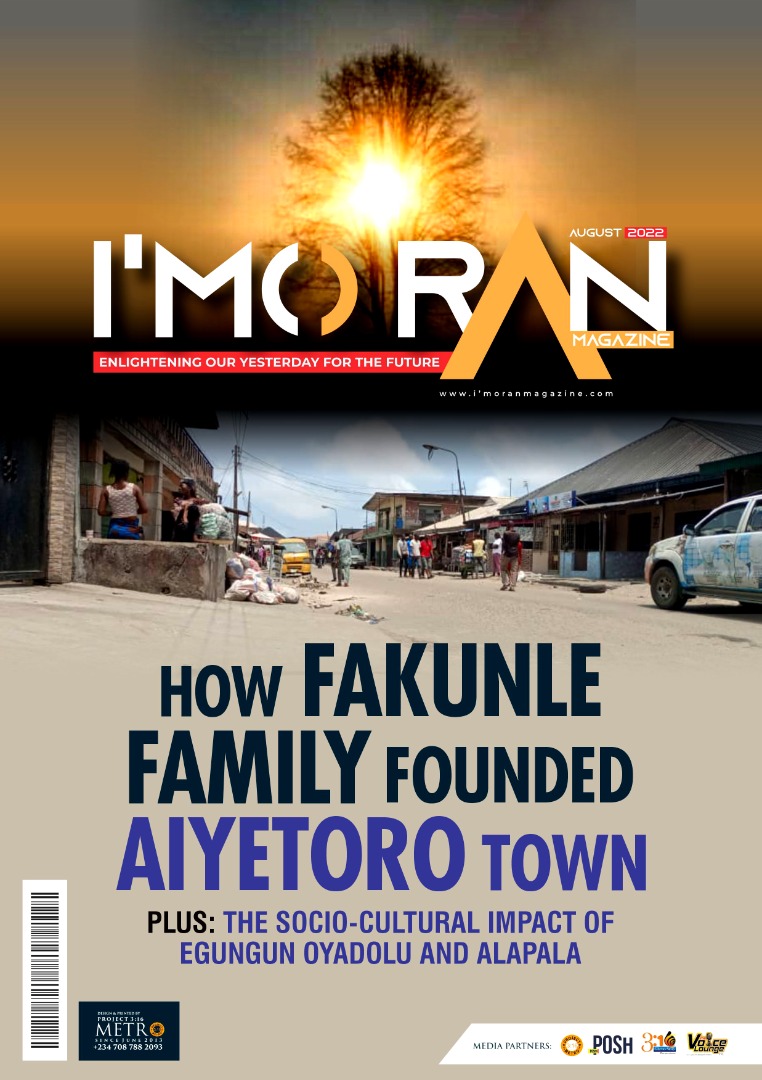 The Fakunle chieftaincy family is reputed to be one of the early settlers in Ojoraland. The family whose aboriginal source is from Oko-Faaji in Lagos Island migrated to Apapa-Elemu in the early 18th century.

The Fakunle family is an extended family that crossed the Lagos Lagoon with her kinsmen and was led by late Pa. Emmanuel Fakunle to the present day Nigerian Navy Quorra.

The Fakunle family, whose major preoccupation was farming and hunting, came with their Egungun {Masquerade} deity to Apapa-Elemu {present day NNS Quorra}. They moved in droves as they finally migrated to the present-day Federal Government Press.

The then Western Region Government’s incursion on the land made the family move to the place now known as Alayabiagba. They settled at the street now known as Tieda Fakunle Street, which from time immemorial was the final abode of late Pa. Okeniyi Fakunle.

Since the family has attained recognition from the land owner; the Ojora Chieftaincy family {now Ojora Royal Family}, especially since the 18th century when the land owner appointed late Pa Emmanuel Fakunle as the Ba’ale of Alayabiagba harem in 1872.

More so, the Fakunle family, judging by the etymology of the family name; IFAKUNLE, holds in high esteem, the Ifa divination as their guiding path in life, hence the continuous consultation for a greener pasture.

So after the death of Pa. Emmanuel Okeniyi Fakunle, the eldest son; Daniel Okeniyi Fakunle preferred to remain in Alayabiagba harem {Tieda Street}, his younger brothers and sister, which comprises of Sanusi Fakunle, Raliatu Fakunle, Bisiriyu Fakunle, Olayinka Fakunle, Rufai Fakunle, Taiwo and Kehinde Fakunle, sought for Ifa divination in order to move to another land and seek for greener pasture.

After the Ifa consultation, it was revealed that the Fakunle kinsmen should move further to another land, and upon getting to the new place, the brothers and sister agreed that the new land is called ‘AIYE-TO-TORO’ {Land of Peace}. It was later and over the years abbreviated to ‘AIYETORO’.

The prominent masquerade of the Fakunle family is Egungun Oyadolu and Egungun Alapala. The family worships deities such as Oya, Sango, Obatala, Ogun, and Osun among many other deities. There are some significant points in Aiyetoro where heavy sacrifices were made and some points where ordinary sacrifices were made. And the names of these ritual points are reserved and revered by the Fakunle family, which up till the present day, offers sacrifices on these spots in order to appease the deities in Aiyetoro. The main shrine of Aiyetoro town in Ajeromi-Ifelodun Local Government remains in the Fakunle compound of Ba’ale Aiyetoro Street.

The town which has undergone cosmopolitan changes via influx of new settlers, such as the Taju Balogun family in Kehinde Street, the Emina Family in Oduduwa Street, the civil service presence by the Adekomaiya family, led by late Ba’ale Alexandra Adekomaiya {The longest serving Ba’ale of Aiyetoro till date} and the Islamic influx led by late Imam Mukadam, the collective impact of the late Chief Oladiti, the architectural evolution of how many houses in Aiyetoro were changed from planks to blocks by the late developer and Ba’ale of Aiyetoro, Chief Rasheed Olatoye, and the political presence of the Arogundade Family, have over the years made the town to become habitable and peaceful for all.

After the death of late Pa. Emmanuel Fakunle in 1910 as the Ba’ale of Alayabiagba harem, late Daniel Okeniyi Fakunle {Tieda} was appointed by the then Ojora chieftaincy family to rule from 1947 -49 when he died, and late Chief Bisiriyu Fakunle taking over. The then High Chief Bakare Faro Olugbode, head of Ojora chieftaincy family, appointed late Chief Taiwo Oseni Fakunle, who was a retired officer of Marine Shipping Company, was appointed as the first documented {Gazette} Ba’ale of Aiyetoro in 1952. The late Ba’ale Taiwo Oseni Fakunle was a member of the Western House of Chiefs and the 1st Justice of Peace in Ajeromi Area, known as Badagry division. He died on September 11, 1965. The late Ba’ale Alexandra Adekomaiya took over in 1967 and reigned till 1993 upon his death. The tussle between late Alhaji Muyibi Adisa Fakunle, who was elected Ba’ale of Aiyetoro, was politically shortchanged when Late Ba’ale Rasheed Ajani Olatoye was installed as the new Ba’ale of Aiyetoro in 1994 until his death in 2004. The Ba’ale stool returns to the Fakunle Chieftaincy family, the traditional and aboriginal founder of Aiyetoro in 2005 when Ba’ale Saheed Adesegun Fakunle ascended the throne to date.