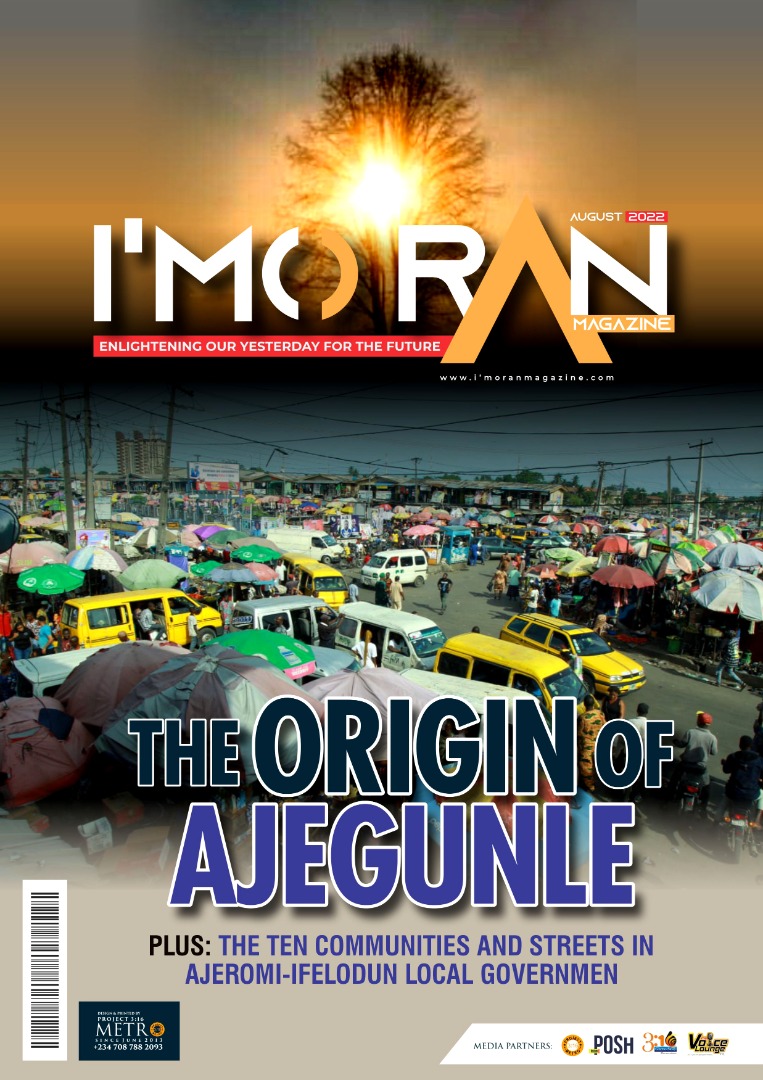 Ajegunle is a cosmopolitan city in Lagos State. The history of Ajegunle dates back to the 19th century. And it is interesting to know that the word Ajegunle which literally means: ‘THIS IS WHERE MY WEALTH RESIDES’ is a near boundary coinage adopted to represent the geographical land mass of the modern-day Ajeromi-Ifelodun Local Government and Ifelodun LCDA in Lagos State. The irony of this is that Ajegunle community inside Ajeromi-Ifelodun Local Government has less than 20 Streets!

The purpose of this DOCUMENT is to ensure that the younger generations are equipped with the appropriate information, and equally to be endowed with verifiable legacies which can serve as educational resources and preservation of the socio-cultural background of one of the most populous cities in Nigeria.

Ajeromi-Ifelodun Local Government Area was CREATED IN 1996. It constituted one of the three district councils under Badagry Division. Since the issuance in 1968 of the administrative Division (Establishment) Edict which broke Lagos State into Five Administrative Divisions (Lagos, Badagry, Epe, Ikorodu, and Ikeja). The two other Districts in Badagry Division were Egun-Awori and Awori Districts. However, the local government reforms of 1976 introduced a major political and physical reorganization of the division.

With the consequent enactment of the local government Edict of 1976 by the State Government, the former three District Councils in Badagry Division: Egun-Awori, Ajeromi-Ifelodun, and Awori Districts were merged and brought under one umbrella; BADAGRY LOCAL GOVERNMENT. These three district Councils constituted what was then known as Badagry Local Government with Badagry being the Administrative Headquarters. The boundary stretched eastwards from Apapa in Lagos to Seme border in the West.

However, with the emergence of civil administration in October 1979, the then Governor of Lagos State, Alhaji Lateef Jakande further split the Local Government in Lagos State into twenty-three (23) in order to bring the Government closer to the people. Badagry Local Government was therefore split into three autonomous councils, Ojo (former Awori District), Ajeromi/Ifelodun, and Badagry. But this structure was short-lived as a result of the military take-over in 1983. One of the steps taken by the then Federal Military Administration of General Buhari/Idiagbon on the assumption of office in December 1983 was to nullify all the local governments created by the civilian government between October 1979 and December 1983. As a result of the restructuring, the Lagos State Government under Commodore Mike Akhigbe, reverted to eight local governments created during the 1976 Local Government Reforms.

Realizing that the defunct civilian administration from 1979-1983 could not accomplish the aims and objectives of the 1976 reformed local government system, the then Chief of Staff, Supreme Headquarters, late Major-General Tunde Idiagbon set up a 20-man committee headed by Alhaji Dasuki to, among other things, re-examine the existing structure, functions and financial resources of local governments. The committee in its report noted that the system of local government in the country after the 1976 reforms had more operational problems than structural problems. On the creation of a new local government, the agitation of which was rife at that period, the committee recommended that if new local governments were to be created at all, it should not be less than 10 yearly intervals. However, the committee recommended the following criteria for the creation of a new local government: (1) A minimum population between 100,000 and 150,000 (2) A minimum tax-paying population of 20,000 (3) Geographical congruity (4) Tradition, association, and wishes of the community in the area (5) Financial viability of the area in question- ability to generate internally at least 50% of the revenue required to fund the local government annual recurrent expenditure, and (6) Administrative convenience.

The number of local governments in Lagos State remained at twenty despite genuine agitation by Lagosians for the creation of additional Council areas. This agitation was perhaps fuelled, among other things, by the glaring imbalance in the number of local governments created in the North as against those created in the South-West. The Kano State example readily becomes a reference point. Before 1996, Kano State had 44 local government councils, but in 1996 when States and local governments were created, Jigawa was carved out of Kano State with 40 Local Governments Councils at inception. It must be noted that by virtue of the 1991 provisional census figure, Lagos State was having the highest population figure in Nigeria, higher than that of Kano State even before Jigawa State was created out of the former. By these statistics, it means that Kano and Jigawa States whose population, when put together is less than that of Lagos State are having 84 local government councils as against 20 created in Lagos State, with less population figure and invariably less responsibility to attract higher statutory allocation from the Federation Account than Lagos State that has greater socio-economic responsibilities and challenges than both States.

However, the clamor for the creation of an additional local government in Lagos State raged on until October 2003 when His Excellency, Asiwaju Bola Ahmed Tinubu, the Executive Governor of Lagos State took the bull by the horn and created additional 37 Developmental Councils out of the original twenty local governments. This was indeed a bold and brave step in the face of overwhelming opposition. Though the exercise did not increase the normal statutory allocation of Lagos State local governments, the political experiment was a huge success as governance ever more than before, is brought closer to the people with the meager resources spread.

Ajeromi-Ifelodun Local Government presently covers about 2.216 hectares of land with 97% development, leaving 3% comprising gutters, canals, and swamps. The local government is geographically below sea level, and virtually half of the total landscape is a reclamation of swamp and mash. Its dense population comprises diverse populated settlements, towns, and communities made up of people of disparate ethnic origins or nationalities and cultures. The local government is essentially residential and is best described as a semi-urban community with an overtly retail economy.

The 1991 provisional census result of Lagos State put the figure at five million, six hundred and eighty-five thousand seven hundred and eighty-one (5,685,781.00). Ojo Local Government under which Amuwo Odofin and Ajeromi/Ifelodun were then Area offices in 1991, by the provisional figure released, had a total population of One million and eleven thousand, eight hundred and eight (1,011,808.00) the highest recorded in any of the twenty local governments in Lagos State and in the 774 Local Governments in Nigeria as a whole. The recent distribution of the National Identity Card in Ajeromi-Ifelodun Local Government in Lagos State alone has, however; shed more light on the population of this local government. Approximately, over four million National Identity Cards were said to have so far been distributed to the populace with hundreds of thousands still to be given out. This does not include figures for the underage and those that did not meet the age requirement at the time of registration. As a matter of fact, not many States in Nigeria have the population concentration as exists in Ajeromi-Ifelodun Local Government, yet what comes to the local government from the federation account as the grant is far less than what the states do collect. The fact that Ajeromi-Ifelodun Local Government is more populous than most States in Nigeria implies that the socio-economic responsibilities and challenges being borne by the local government are far greater and enormous than what most of the States in Nigeria shoulder. And by extension many countries in Africa: Countries as Togo, Chad, Burkina Fasso to mention just a few do not have the socio-economic responsibilities being borne by Ajeromi-Ifelodun Local Government.

To further illuminate the over-whelming responsibilities being shouldered by this local government is the fact that presently, it has within its jurisdiction, Seventy-two (72) Public Primary Schools and Thirty-nine (39) Public Secondary Schools, while it has over two hundred (200) Private schools (Primary and secondary inclusive). The population of students in AJIF local government is over two hundred thousand and this clearly suggests that more infrastructural development is needed in the local government.

Ajeromi-Ifelodun Local Government Area is bounded on the North by Suru-lere Local Government, on the South by Atlantic Ocean Apapa-Tincan, Oshodi, Apapa Expressway, and on the Eastern flank by Apapa Local Government, and the North by Ogun State. The land size is 2,216 hectares, with 97% development and leaving 3% which comprises gutters, canals, and swamps. The boundary stretched eastwards from Apapa in Lagos to Seme border in the West.

Predominantly petty trading and diverse commercial enterprise, increase in major, mini markets and night markets dotting nooks and crannies. And in recent times, the proliferation of hospitality businesses and other entertainment hubs.

SOCIO-CULTURAL: It is a potpourri of the volatile, complex, and sprawling urban slum, the cosmopolitan population mix and setting comprising major and minor ethnic nationalities, tribes, cultures, origins, and tastes. The rich cultural tradition of Egungun festival and Igunu Ko festival are the major cultural highlights in the Local Government Area. Ajegunle commands a formidable pool of renowned international superstars and local soccer stars. The community is a haven for many accomplished popular Nigerian musicians, recording artists, and entertainment gurus. Ajegunle is referred to as mini-Nigeria and the national headquarter of PIDGIN English.

ESTIMATED POPULATION: About 2.2 million people resident in Ajeromi-Ifelodun Local Government, comprising densely populated communities, towns, and settlements, which comprise various ethnic, tribal, and multi-national origins and cultures, large population spread and geographical density rank it as one of the largest L.G.A in the federation. Described as mini Nigeria because of the large presence of every tribe/denomination and tongue who populates this sprawling land mass.

THE COMMUNITIES IN AJEROMI-IFELODUN LOCAL GOVERNMENT

Like the many folktales that heralded communities and nations, Ajegunle is not an exception. The socio-cultural heritage of this land cannot be dissociated from some families who have survived many generations and have continued to exhibit their cultural values and customs in the face of the growing cosmopolitan nature of what Ajeromi-Ifelodun Local Government has become.

However, some people, groups of people, and families are regarded as the first settlers in Ajegunle. These families such as the Adeyemos, Fakunles, Bakares, Adekunbi, Thomas, and others have ensured that their socio-cultural antecedents in these communities remain progressive for historical, academic, and social relevance.

It is on record that the Adeyemo Family invented the name AJEGUNLE (Ibi ti Ajemi Gunle Si Ree) meaning ‘This is where my wealth resides’.

Whereas the Fakunle Chieftaincy family since 1872, and whose sojourn began in 13. Afnah Street at Ita-Faji, Lagos-Island, was the first settlers at Apapa-Elemu (Marine Beach), before moving to the now Federal Government Press, and then became the first known settler and Ba’ale of  Alayabiagba in 1872, before the family finally founded Aiyetoro (Aiye mi to toro) in the early 19th century.

Aside from this, the early influx of population by tribes to Ajegunle recorded people from Kwara State as one of the early settlers in Ajegunle, no wonder, Streets like Ojoku, Oshodi, and Ajadi Streets amongst many others testify to the continuous concentration of indigenous Kwara residents among some of the notable communities in Ajeromi-Ifelodun Local Government.