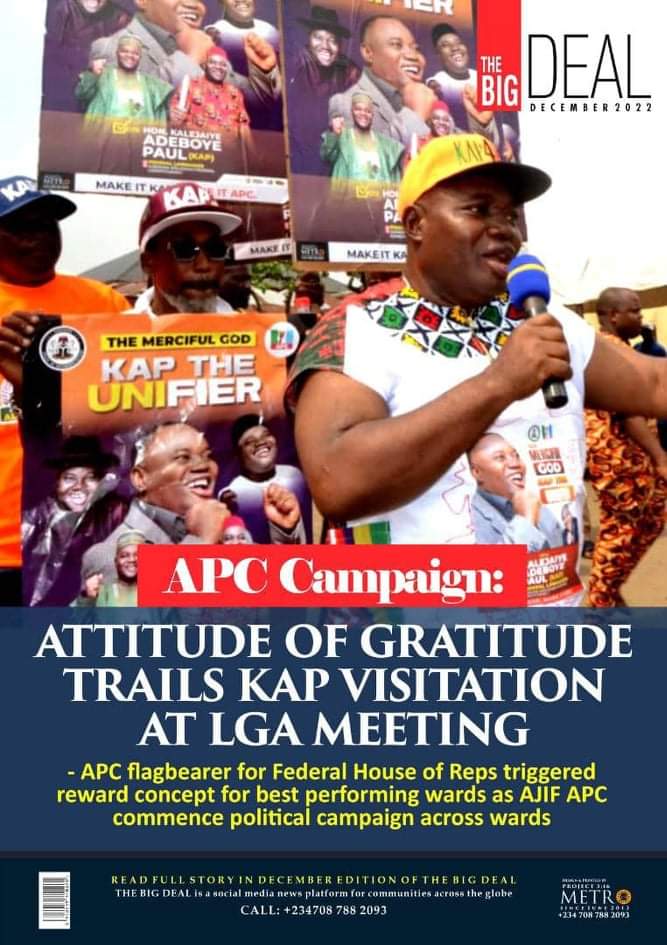 The All Progressives Congress {APC}, candidate for the 2023 Federal House of Representatives election in Ajeromi-Ifelodun Federal Constituency, Hon. Kalejaiye Adeboye Paul on Saturday, acknowledged the goodwill of the masses toward his candidature as the APC commence its political campaign at the grassroots.

Speaking at the party’s general meeting that was held on Saturday at Local Authority Primary School in Ago-Hausa, Hon. Kalejaiye began his gratitude for being the party’s candidate by acknowledging God’s mercy and the people’s support, towards his journey to represent Ajeromi-Ifelodun federal constituency at the ‘Green chamber’ in Abuja.

Expressing himself; the APC candidate said God has been wonderful and that he was not going to disappoint the masses once elected as the representative for Ajeromi-Ifelodun federal constituency.

On the commencement of political campaign across wards in Ajeromi-Ifelodun local government, Hon. Kalejaiye said it was important members of the party in various wards demonstrate their readiness the receive APC candidates during visitations. According to Hon. Kalejaiye who was Special Adviser on rural development to Governor Bola Ahmed Tinubu and Mr. Raji Fashola {SAN}, said the reward system shall be introduced for political wards who demonstrated colourful reception of candidates during the planned campaign rally in the grassroots.

“We shall award marks and reward each ward according to the crowd,” he announced.

Hon. Kalejaiye also charged ward chairmen to maintain healthy communications with the 15 delegates per ward, adding that these wards’ representatives should be showcased during visitations. “That way, we will have given them a sense of responsibility in making them understand the task ahead,” he added.

On the other hand, the Local Organising Committee {LOC}, for the 2023 general elections in Ajeromi-ifelodun and Ifelodun respectively, led by Hon. Fatai Shuaib Ajidagba, announced the timetable for ward visitations. He urged ward chairmen to brace up and prepare ahead of the scheduled time for their various wards.

“We shall aid your preparations for ward visitations with some funds in the aspect of renting chairs and sound systems,” he said.

← Interesting Read: <strong>YOUTH RESTIVENESS: IT IS THE RESPONSIBILITY OF COUNCIL CHAIRMEN TO REDUCE POVERTY IN NIGERIA – AYOOLA</strong> →