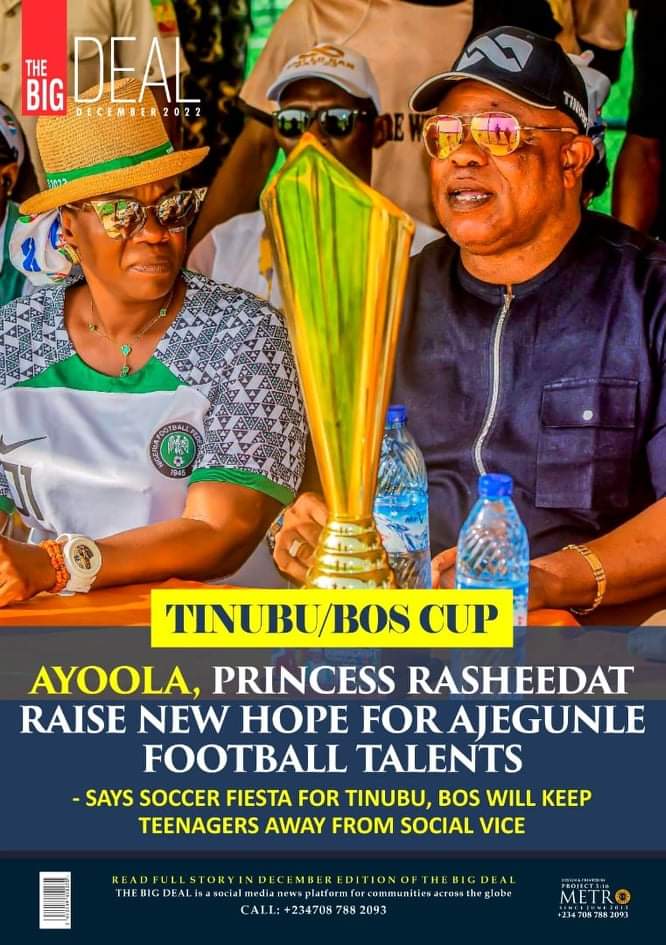 -Says soccer fiesta for Tinubu, BOS will keep teenagers away from social vice

The two council mayors, who spoke during the four-day soccer fiesta held at the Maracana sporting complex in Ajeromi-Ifelodun Local Government a few days ago, believed that youths will shun social vices, once they are kept productive with sporting activities.

Hon. Fatai Adekunle Ayoola, executive chairman of Ajeromi-Ifelodun local government, said his administration was quick to identify sports as one of the major solutions to curbing youth restiveness in Ajegunle.

He said: “We understand the fact that football plays an integral part in the lives of teenagers in Ajegunle, and my administration was quick to come up with various modalities by using it as a tool to reduce criminal tendencies and other vices among teenagers in Ajegunle.”

To Hon. Ayoola, some public schools in Ajeromi-Ifelodun local government have been equipped with modern sporting facilities, and the youths are free to utilize them to their advantage.

He noted that his administration, through the Ajeromi-Ifelodun Sports Council, shall continue to organize programs that will expose the youths to international stardom and personal development in the area of their sporting professions.

On her part, the executive chairman of Iru/Victoria Island LCDA, Princess Rasheedat Abiodun Adu, whose team participated in and won the U-15 category at the Maracana soccer fiesta, believed that sports are a unifying factor for a healthy society. She opined that her administration had encouraged and sponsored budding sporting enthusiasts for excellence over the years because she loves sports. She noted that it was one of the duties of council chairmen to identify sporting talents in their various local governments, and local council development areas.

She urged rising talents in Ajegunle to intensify efforts by making their skills to become valuable for personal and collective use in the near future.

The Iru/Victoria Island council boss who elaborated on the good use of skills was of the opinion that skills among youths should be exhibited for maximum use in order for it not to be a waste. “One of the most important things that we can give to our people is that they make good use of their skills because if you have a skill and you don’t exhibit it, will be a waste,” she said.

She urged Ajegunle youths with greater skills to give it out. This she described as ‘Impacting knowledge in order to gain more knowledge.’

Hon. Princess Rasheedat Adu used the medium to advise youths, in general, to shun violence, and cultism and engage more in productive activities such as sports. She added that the soccer fiesta was an avenue to create better advocacy on the impacts of the ruling party, APC in Lagos State and Nigeria.

“This medium was used to showcase what we have done as a government at the grassroots, and we hope the youths will understand and get inspired to vote for our party going forward to the general elections next year,” she added.