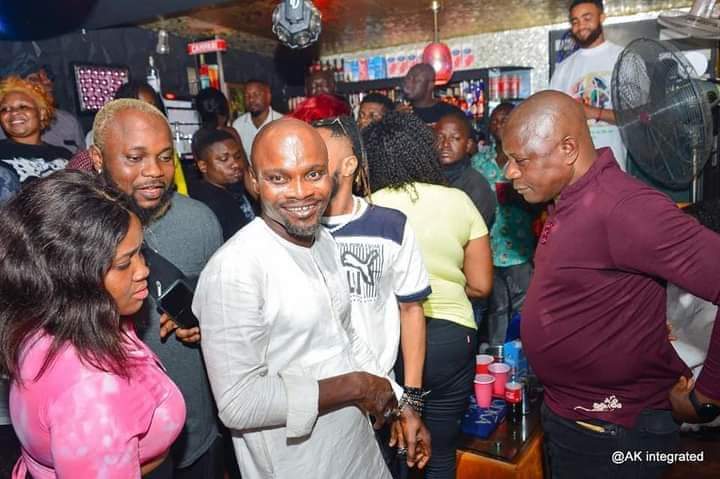 When Job’s wife in the Holy Bible, tried to persuade him from the Lord when she said: ‘Curse God and die!’ Job replied: “Shall we indeed accept good from God, and shall we not accept adversity” {Job 2:10}, is a cosmic narration of the gratitude that embellished the birthday party of Ajegunle ‘Street Socialite’; Alhaji Amuda Yusuf Tenibegiloju, popularly referred as ‘Alhaji Change Channel’.

And like in the etymology of his pseudo name; ‘Change Channel’, many have written off the once larger than life street philanthropist, immediately the fairy tale truck business came to a halt in Ajeromi-Ifelodun Local Government Area. And to them; his channel of wealth has changed to penury!

To those who took the front seat to empathize with him at this stage, and found out that Alhaji Change channel’s daily endeavors underwent a private life, did so out of sheer intent to ridicule him and spread his humble tale beyond reality.
To many, especially within the political circle in Ajegunle, have suddenly found this moment as a source of vendetta, and ready to pounce with unprintable tales of ‘Once upon a time.
However, while they touted him and scorned him like Lazarus before Dives, Alhaji Amuda Tenibegiloju was resolute and thankful like Hanah. He was prepared for the aftermath like Abigail, because God saved his life from the enemies who despised his years of glory, and he was thankful once again like Esther because God used Alhaji Amuda Yusuf Tenibegiloju to take many boys away from illicit activities in Ajeromi-Ifelodun Local Government Area, through engagement and productive empowerment with informal job tasks.

The attitude of gratitude about Amuda Tenibegiloju came to the twilight on Thursday, January 6th, 2022, when he celebrated his birthday. For the Traducers who never saw anything good in Lazarus and Job, they left disappointed and became restive that despite his brief travesty, the hand of Hon. Fatai Adekunle Ayoola is strongly written on the wall of fate in the lives of Amuda Yusuf Tenibegiloju!
And like the rock of Gibraltar, attributed to Tariq Ibn. Ziyad, after his Umayyad conquest of Visigothic Hispana [Present day Spain and Portugal] in 711-718, Hon. Fatai Adekunle Ayoola has remained the ‘Rock’ in the modest comeback of Amuda Yusuf Tenibegiloju.

The beneficiaries, who carted away the golden eggs from the Goose some few years ago, should be consoled by the fact that they are forgiven as Prodigal sons. Ayoola has embedded the forgiven spirit into the attitude of Amuda Yusuf Tenibegiloju, and for Alhaji’s change channel, his woods of flame will remain shinny and cannot be quenched forever!
Congratulations to you, on the successful celebration of your birthday.