APC HOUSE OF ASSEMBLY: ISAAC SUCCESS OMOYELE IS DARING THE ODDS IN AJEGUNLE WITH BOLD ASPIRATION 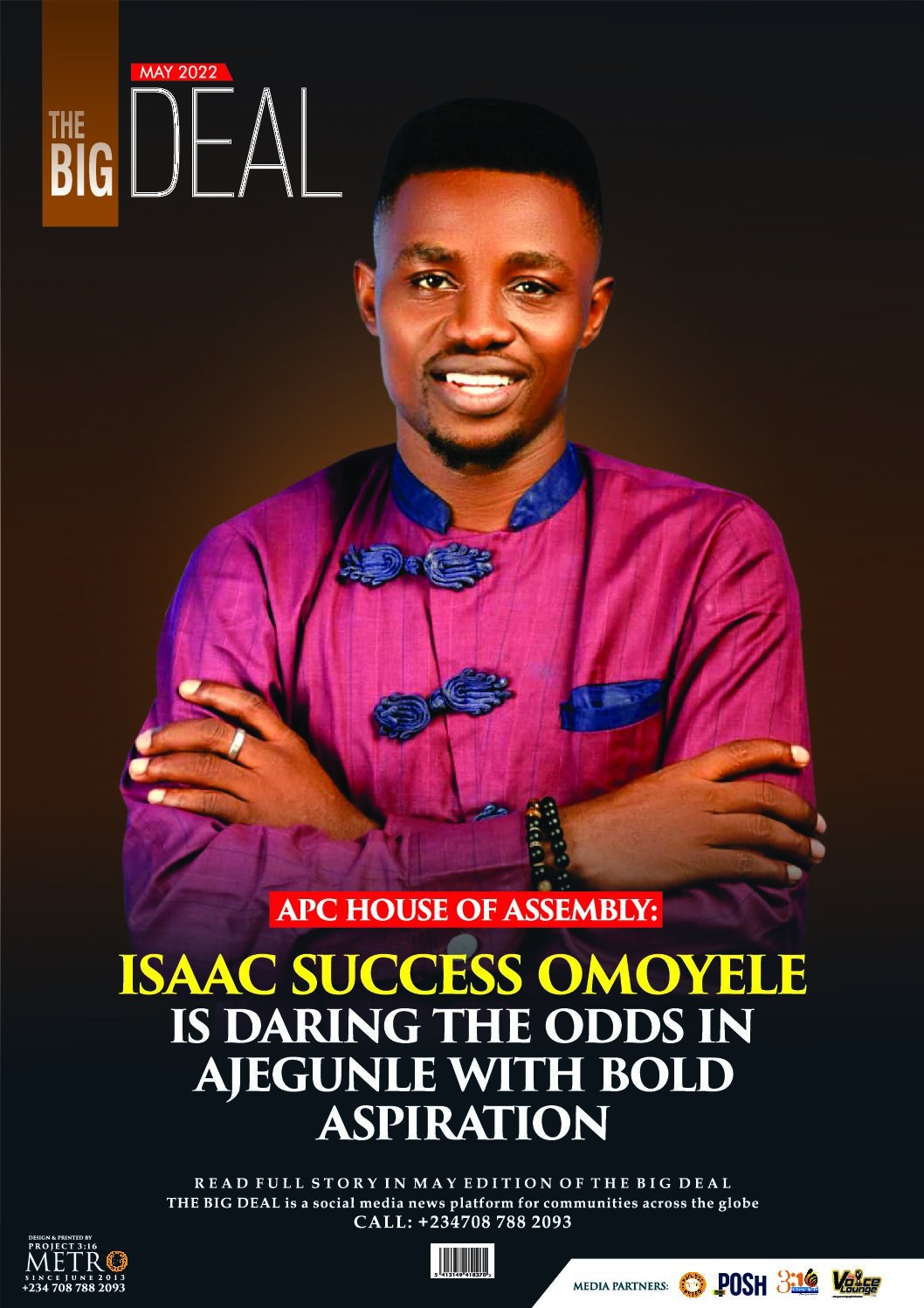 With the All Progressives Congress {APC} primaries slated for tomorrow, Thursday, May 26, 2022, Ajegunle social worker and founder of Dreams from the Slum Empowerment Initiative, Isaac Success Omoyele is daring the odds with his aspiration to seek the nod of the ruling party for the much-celebrated Lagos State House of Assembly ticket in Ajeromi-Ifelodun Constituency 2. And to some political observers, the incursion of the Future Awards Africa Prize winner for Community Action in 2019 may be considered a political wild card entry, but his social antecedents may be the new evolution for independent-minded youths to dream and dare for the emancipation of ordinary citizens in Ajegunle, writes Fakunle Sheriff Ekundayo

The famous Russel Crowe who starred as Maximus Decimus Meridius, in the award-winning Gladiator; played to the gallery with his daring heroics before the Romans, thus earning himself a deliberate and aggressive manipulation to be publicly assassinated in a game of sorts inside the ring by Commodus, the ambitious son of Emperor Marcus Aurelius. And knowing too well that he may lose his life in this epic show of solidarity to the common people of Rome, who rarely had a say in the real business of Roman life, demonstrated the bravery that was to signal the end of an era in the history of the Roman empire, aptly exemplified the grand entry into politics by Isaac Success Omoyele in Ajegunle.

The founder of Dreams from the Slum Empowerment Initiative may have brought to himself global recognition and enviable technical savvy, having been an alumnus of the prestigious Lagos Business School, with an array of distinguished networks, both home and abroad, yet, he appears as a greenhorn to many within the communal terrain of grassroots politics.

For many who understands the rudiment of political structure, Isaac Success Omoyele may have broken the traditional barrier of having to follow the political stereotype of a leader, who is saddled with the responsibilities of showing the pathways to his proteges in the trajectory of political affairs and struggles. And to Omoyele, the spirit of social conviction breeding from the ‘I Can Do It’ spirit was all that has reinforced his political conviction to dream and dare in the murky water of politics of Ajegunle!

For a start, the incumbent lawmaker representing Ajeromi-ifelodun Constituency 2, Hon. Fatai Olatunji Oluwa, is already in a race with Sabur Akanbi Oluwa, Toheeb Jaiyesinmi, and Adeoba Adebisi Elegunde for the party flagbearer, and it appears that swinging of the pendulum on who clinch the ticket is too close to call, and owing to this, the political structure may appear rather stifle for the emergence of an Isaac Success Omoyele.

For every discerning mind, it must be imperative to acknowledge the coming of Mr. Omoyele as a breath of fresh air and a new political resurgence away from the norms. He has successfully set a new template for the vibrant youths in Ajegunle to unlock their dreams and dare what they considered a political taboo and brazen temerity before the political hierarchy in rural-urban communities across Lagos State.

Mr. Omoyele has invested socially in the development of Ajegunle. His social activities, especially in under-served communities have liberated many homes with almost free education, free food, and communal orientation for young families on health-related programs.

His organization successfully attained the spotlight with the humanitarian drive to sustain the vulnerable during the Covid-19 pandemic. Dreams from the Slum Empowerment Initiative fed many homes through partnerships with organizations, philanthropists, and individuals.

And with such selfless service, his brand gained much-deserved recognition with the government in the grassroots of Ajeromi-Ifelodun Local Government, as Dreams from the Slum Empowerment Initiative, partnered with the administration of Hon. Fatai Adekunle Ayoola to provide palliative and reduce the economic suffering of many homes in Ajegunle.

For Issac Success Omoyele, he has raised the standard of social service with the first-of-its-kind Ajegunle Co-working Hub, an entrepreneurial concept geared toward providing corporate remedies for up-and-coming entrepreneurs to utilize and realize their dreams as a business owners.

And while Isaac Success Omoyele may not fit into the political philosophy of an existing ruling class, he has demonstrated the willingness to speak for the ordinary people, who in some quarters may have been politically disenfranchised to aspire and realize the dreams of representing the commoner on the street as a lawmaker.

To this end, it does not matter to an extent, the outcome of tomorrow’s primaries, because Isaac Success Omoyele has set the precedent for a new political culture to dare and believe in a better tomorrow, especially in Ajeromi-Ifelodun Local Government Area!