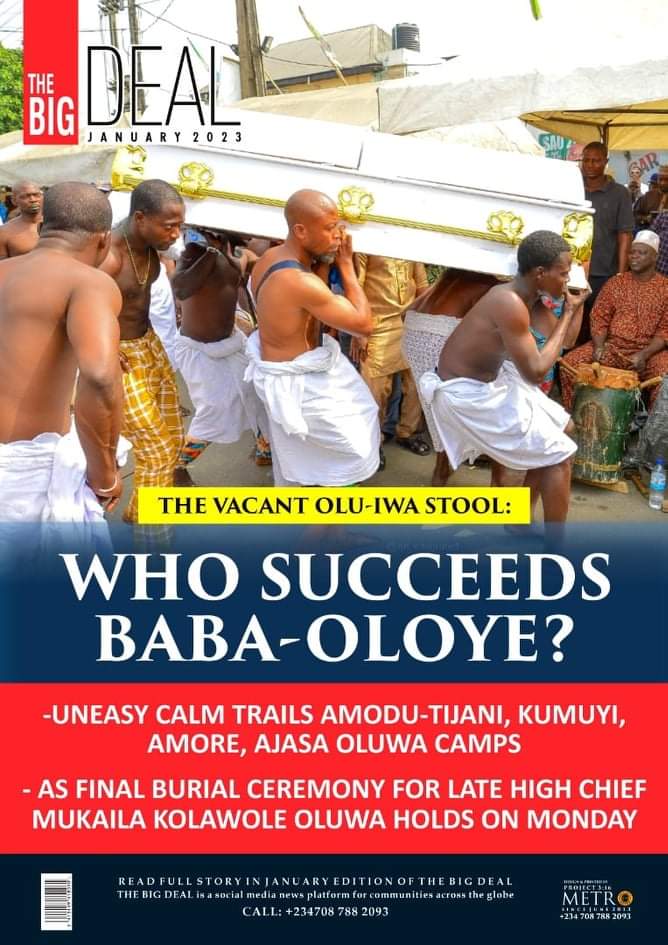 There had been untold royal permutations from the patriarchal lineages in the Oluwa chieftaincy family, following the recent demise to the great beyond of the Olu-Iwa of Lagos, High Chief Mukaila Kolawole Oluwa , some few weeks ago. And while the Ayoola’s administration, Lagos traditional white cap chiefs in consultation with the Oba of Lagos and the Lagos State Chieftaincy Council, commenced the rites on who ascends the throne for a true traditional royal status of the Oluwa dynasty in Lagos, the klieg light would be on the Apex leader of the All Progressives Congress {APC}, Prince Rabiu Adio Oluwa, being the Asiwaju of Ojora land and De-facto in principle for the family, on who becomes the new Olu-Iwa of Lagos, writes Fakunle Sheriff Ekundayo…

As the administration of Hon. Fatai Adekunle Ayoola in consultation with the Oluwa chieftaincy family concluded plans to stage the final burial ceremony for the former Olu-Iwa of Lagos, late High Chief Mukaila Kolawole Oluwa, on Monday, January 9, 2023, the major undertone spanning hierarchical intrigues may begin to unfold, judging by the anticipated demeanours of the Oluwa stakeholders during the public outing tomorrow.

The throne, which had undergone many years of internal disputes, and was resolved during the reign of late High Chief Mukaila Oluwa, had enabled ancestral unity among kinsmen of the Oluwa dynasty to come together and establish a true traditional royal status quo for their fiefdom in Lagos State.

And now that the long battle among other settlers in the territory who claimed ownership of the place with the Oluwa kinsmen had been put to proper administrative perspectives by the Lagos State government, the family as a unit must forge ahead and produce the next Olu-Iwa before the end of the first quarter of the year, in order to complete the royal agitations by the late High Chief Mukaila Oluwa.

This moment will not be permitted to go without remembering the impacts of the late Olu-Iwa, towards sustaining the royal hegemony of the Oluwa dynasty in Ajeromi-Ifelodun local government, and in some neigbouring local governments and local council development areas in Lagos State. And for the ghost of late charismatic High Chief Mukaila Kolawole Oluwa to rest in peace, the altruistic legacies and framework for an established royal ascendancy for the Oluwa kindred must be accomplished without any further delay.

For the established ancestral patriarchies in the Oluwa family, which consist of Amodu-Tijani,  Kumuyi, Amore, Idewu, Asalu, Akibo, Ajasa among others, may be warming up for the next stage after the burial tomorrow, especially on who becomes the new Olu-Iwa of Lagos.

It does not matter the internal mechanism that may be adopted towards choosing the heir apparent for the throne, what is paramount should be who is crowned the new Olu-Iwa of Lagos in 2023!

Sequel to the aforementioned, the bulk of this riddle rest on the table of Asiwaju of Ojora land and Apex leader for APC Lagos-West Senatorial District, Prince Rabiu Adio Oluwa. Being the prominent face of the family in the Lagos APC government, and Baba-Oba designate of the Oluwa Chieftaincy family; the chairman of Island Social Club, Prince Rabiu Adio Oluwa, appears to be the ‘De-Facto in Principle’ for the nomination of new Olu-Iwa of Lagos!

Going forward within these lines of royal premises, the Oluwa fiefdom is reported to be in need of a new leader with a youthful personality and passion for the development of the kingdom. The royal tsunami that swept over Elegushi and Oniru land among other royal kingdoms in Lagos State may influence the new royal order for Oluwa kingdom. And for the established ancestral patriarchies in the family, they must hold on to these qualities espoused above, because the Oluwa kingdom is deserving of a new leader who is a unifier, that is traditionally cosmopolitan with respect for norms and values that are embedded in the royal doctrine of the Olu-Iwa throne. The new face of the kingdom must bring development and an appreciable sense of modernity to the throne.

This is necessary for the posterity of the Oluwa’s kindred, and the family led by Prince Rabiu Adio Oluwa, must affirm these glaring necessities, starting from Monday, January 9, 2023!