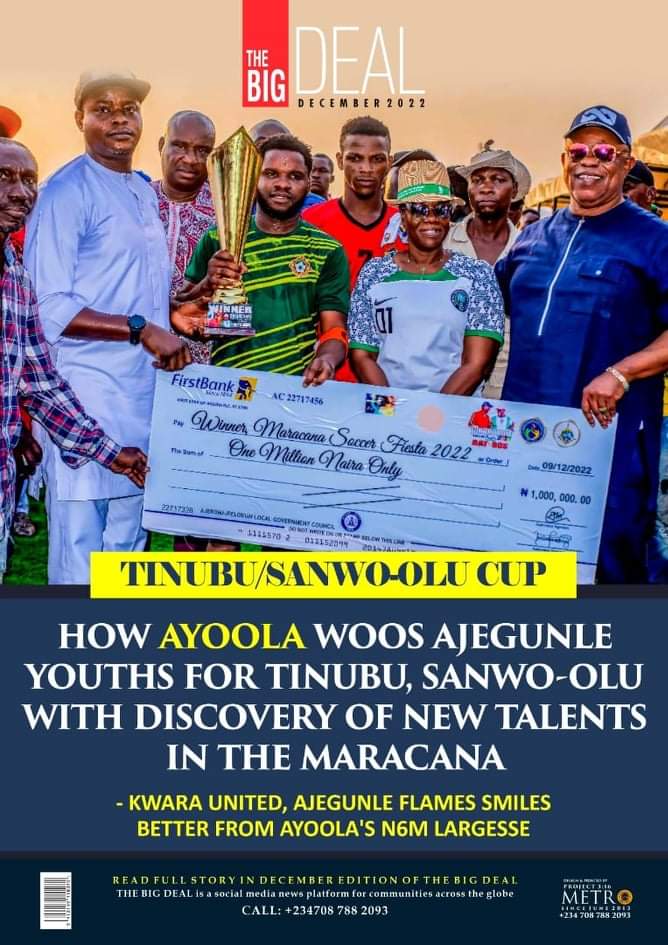 The administration of Hon. Fatai Adekunle Ayoola in Ajeromi-Ifelodun local government has continued to create political awareness and mobilization for the presidential candidature of Asiwaju Bola Ahmed Tinubu and Governor Babajide Olusola Sanwo-Olu, with sports entertainment in Ajegunle.

The recent one is the Four-day soccer fiesta at the Maracana sporting complex and Unity Pry school astroturf pitch, named after sports enthusiast, Nathaniel Idowu.

The football fiesta which featured different categories such as the under 15, 7-A-Side, and free age, was specifically targeted toward providing footballing talents with adequate exposure and better advantage for future success. And in making this effective, Ayoola’s administration through the Ajeromi-Ifelodun Sports Council invited Nigeria’s Premier League soccer teams such as Kwara United and Remo Stars to be part of the four-day soccer fiesta. Other participating teams were the U-15 category from Iru/Victoria Island LCDA which was sponsored by Princess Rasheedat Adu, executive chairman of the LCDA, and Super Angels from Benin in Edo State, among other participating teams.

The 6 million naira largesse, which served as the prize-winning money for winners at the various categories top share was the icing on the cake that added vigour and natural football talents to participating teams at the tourney, especially with Kwara United and Ajegunle Flames FC, carting home the grand prize of N1million naira each at the free age and 7—Side categories.

While speaking with journalists during the final match ceremony that pitched Ajegunle Flames FC against Kwara United in the Maracana, Hon. Ayoola, said the soccer tournament was part of social strategies toward political advocacy for the ruling party APC. In his words: “We shall continue to sensitize the youths on the impact of the ruling party, APC, starting with human and entertainment development in Ajegunle.”

Hon. Ayoola was of the opinion that his administration in the grassroots had enhanced sports development and talent discovery in recent times with the provision of modern sporting facilities that will keep the youths productive in Ajeromi-Ifelodun local government. According to him, the All Progressives Congress as a political party in Lagos State and Nigeria was ready to continue and impact positively in the area of human development and infrastructural facilities to benefit the general populace.

For Hon. Ayoola, the various sporting facilities in public pry schools across communities in the local government are open for use by budding talents who wish to develop themselves. He commended the efforts of Lagos Governor Mr. Babajide Olusola Sanwo-Olu, who ensured that the Maracana sporting complex was completed and available for use during the soccer fiesta.

Hon. Ayoola also reiterated that it was the master plan for Lagos, created by Asiwaju Bola Ahmed Tinubu, during his tenure as Lagos State Governor, which had paved the way for rapid developments across local government and local council development areas in Lagos State. This he said will come with an added facelift in the areas of infrastructure, health, human development, technological improvement, and effective security systems, once APC’s Asiwaju Bola Ahmed Tinubu is elected as President of the Federal Republic of Nigeria in 2023.