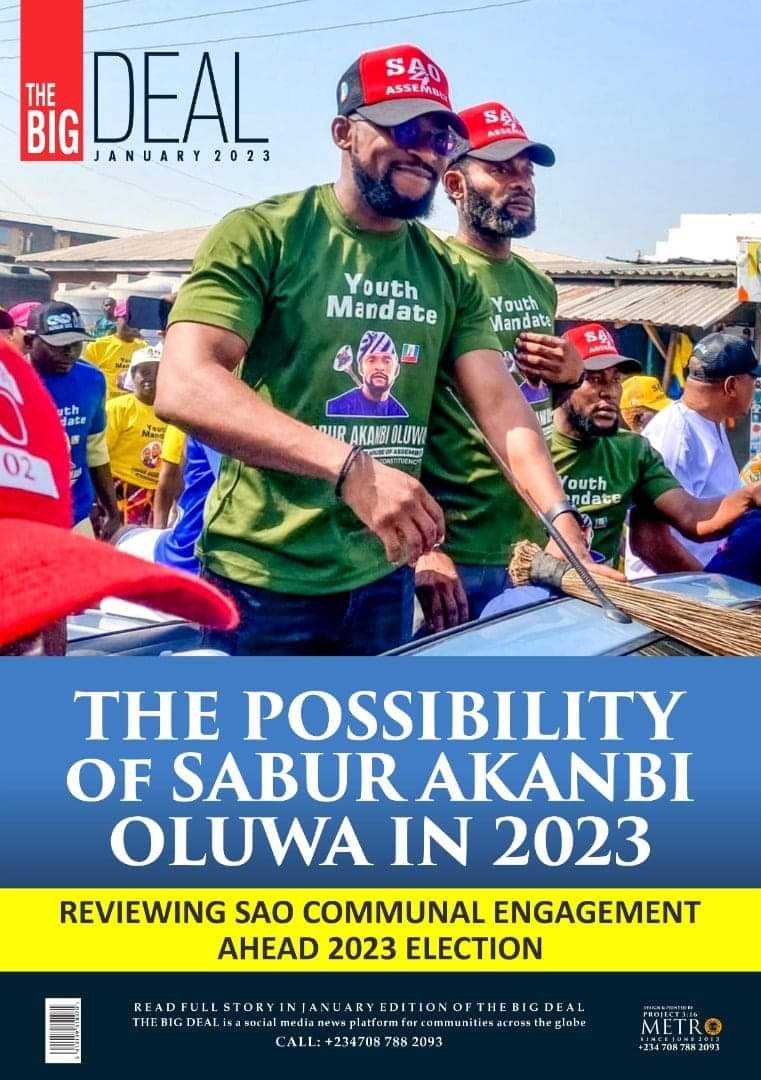 Prior to the attainment of Sabur Akanbi Oluwa as the flag bearer for All Progressives Congress {APC}, at the Lagos State House of Assembly election in Ajeromi-Ifelodun Constituency 2, there had been an uncensored public animosity towards the compound name that birthed Akanbi’s aspiration, judging from the political hegemony that his family is bequeathed with, inside Ajegunle. Unknown to many, the SAO campaign organization had risen from the dust of public acrimony to demonstrating a new sense of acceptance, public trust, and youthful exuberance by covering many miles during communal engagement for social and economic development across wards in the local government, and just like the dictum that portrayed ‘Change’ as the only constant thing in life, Sabur Akanbi Oluwa may be the new possibilities for Ajegunle at the Lagos State House of Assembly in 2023, writes Fakunle Sheriff Ekundayo…

The political temerity that had characterized several communal engagements by the campaign organization of Hon. Sabur Akanbi Oluwa in Ajeromi-Ifelodun constituency 2, calls for an acceptable reflection, as the 2023 general elections draw nearer.

Having been described as a new breed who had ridden on the political crest of his father; the Apex leader of APC in Lagos-West Senatorial District, Prince Rabiu Adio Oluwa, SAO, has carved a niche for himself, and away from the shadows of his father’s political antecedents, by cultivating a new breed of political culture, which is socially intelligible, engaging and communal friendly.

Recent reports indicated the SAO factor in every youth and social engagement across Ajeromi-Ifelodun constituency 2. And even those who were politically and diametrically opposed to the values and ethos of APC had resolved to wear the garb of Hon. Sabur Akanbi Oluwa, and are committed to voting for the party at the 2023 general elections.

If the personality traits of the former legislative aides at the Lagos State House of Assembly and at the Federal House of Representatives in Abuja were anything to go by, then Akanbi knows the pain and solutions to the basic needs of the electorate and the general masses in his domain!

Like a true community and party man, Sabur Akanbi Oluwa integrated his political ideologies into focal issues presented at his numerous communal engagements. He is gifted with the political hindsight of reaching the problems of the people before they were anticipated by those in attendance, and he was categorically genuine in his approach to these various social events.

SAO aspect of public engagement had created a new sense of political possibilities for a vibrant society in the minds of the general masses. He is believable with a compelling personality that was obviously missing among many representatives in the constituency in the past. Such is the political benefit that his communal engagement had birthed over time.

The various Community-Based Organizations {CBO}, youth organizations, medical institutions, the informal business sectors, and artisan communities together with education institutions {both private and public}, will attest to the proactive incentives that the Sabur Akanbi Oluwa’s political campaign had brought to their respective institutions.

Now is the moment of truth, and SAO is not ready to look away from the wrong perceptions about the functions and responsibilities of a lawmaker in Ajeromi-Ifelodun constituency 2, he is oblivious to the masses’ demand for infrastructural development projects that will cut across good roads, public health system, quality academic facilities and essential business opportunities, grants, and many others for benefit of residents in his constituency.

The people as a unit must be made to understand that his role if elected as the lawmaker representing Ajeromi-Ifelodun constituency 2, would be to facilitate and lobby for projects and programs that would be beneficial to the people. These among many others are part of his communal engagements that should be considered as a people for practical public orientation in Ajeromi-Ifelodun constituency 2.

The SAO campaign organization had been constructive enough to receive wider acceptance in Ajegunle, and now is the time for the electorate to remember and consolidate the possibilities of Hon. Sabur Akanbi Oluwa, as the new lawmaker to represent Ajeromi-Ifelodun constituency 2 in Alahusa!