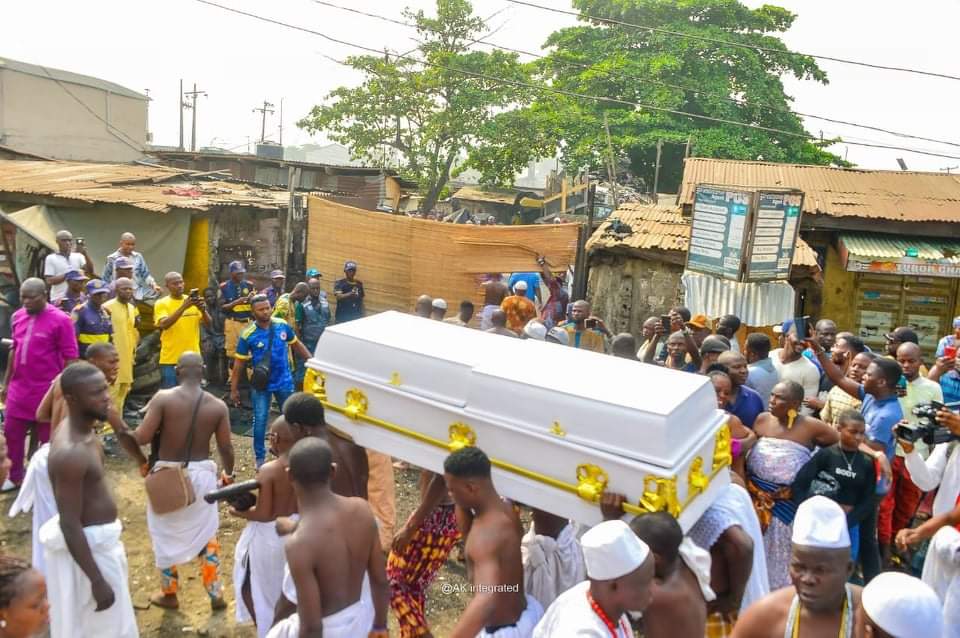 The body of Olu-Iwa of Lagos in Ajeromi-Ifelodun local government, late High Chief Mukaila Oluwa, who died on Monday, January 2, 2023, was finally laid to rest yesterday in Dankaka community of the local government.

The funeral rites which attracted high-powered delegations across Lagos included the staff of office symbol from Oba of Lagos, Oba of Elegushi, Oba of Oniru, Oba of Ojoraland, and the traditional white cap chiefs from Lagos Island among many others.

The remains of the late chairman of traditional chieftaincy matters in Ajeromi-Ifelodun local government were received by the Asiwaju of Ojoraland and Apex leader for APC Lagos-West senatorial district, Prince Rabiu Adio Oluwa, Hon. Fatai Adekunle Ayoola, executive chairman of Ajeromi-Ifelodun local government and other top members of the Oluwa family and traditional chiefs, at the Olu-Iwa palace on Kirikiri road, Araromi community.

The funeral rites were followed immediately at Dankaka community, with a coven of white cap chiefs, the Opa cult, and other groups who performed the mandatory traditional funeral rites before the late High Chief Mukaila Kolawole Oluwa was laid to rest.

Earlier on, the gathering of people in their traditional uniformed attire had attracted attention among residents, who may be witnessing such funeral rites for the first time in the local government.

Vehicles and commercial activities were halted as a mark of respect for the late high chief before he was finally interred.

Expressing his grief, the Secretary of the Oluwa Chieftaincy Family, Prince Wahab Oluwa, described the late Olu-Iwa as a father and brave man who fought death till his final breath.

“We lost a pillar of unity and authority in the Oluwa family, and I pray that almighty God grant his soul eternal rest,” he added.

For Hon. Fatai Adekunle Ayoola, council chairman of the local government, was of the opinion that the late high chief had finally gone to find peace with his maker after a long illness. “He fought a good fight while on earth, may his soul rest in peace,” he said.

← Interesting Read: <strong>YOUTH RESTIVENESS: IT IS THE RESPONSIBILITY OF COUNCIL CHAIRMEN TO REDUCE POVERTY IN NIGERIA – AYOOLA</strong> <strong>THE POSSIBILITY OF SABUR AKANBI OLUWA IN 2023</strong> →