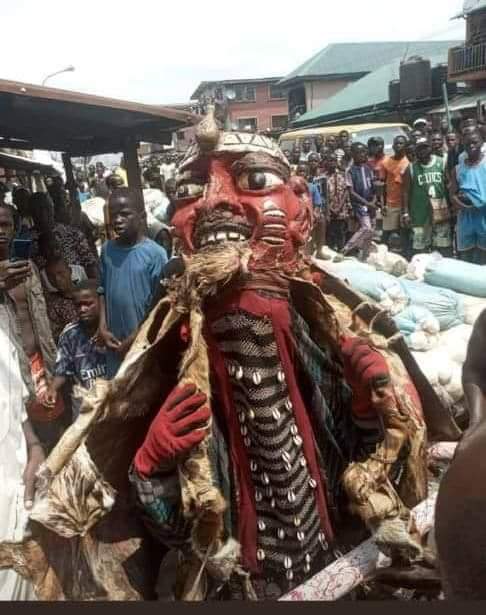 The masquerade A’jeran, which is the town masquerade in Ajegunle, is considered one of the dreaded egungun in Ajeromi-Ifelodun Local Government, owing to her mysterious deity and figurine that comprises bulging eyes, deep scarification, with white beards among other features.

The egungun outing which drew a mammoth crowd received royal blessing and permission to entertain the public, by His Royal Majesty, Oba AbdulFatai Oyeyimika Aromire, the Ojora of Ijora and Iganmu kingdom, during the early hours of Sunday morning, at the Mobil road- boundary roundabout of the local government.

Egungun A’jeran led the crowd from one Agbo-ile egungun {masquerade compound) to another, and with the crowd swelling up in numbers from one community to the other.

The masquerade commenced the outing from Alayabiagba community to Araromi, Alakoto, Awodi-ora, Onibaba, Ajegunle, and Aiyetoro, before retiring mid-day on Sunday.

Ba’ale Adeshina Ojora and Ba’ale Saheed Fakunle, who represented traditional rulers in the local government expressed satisfaction at the successful outing of the masquerade.

According to Ba’ale Adeshina Ojora, who is Ba’ale of Alayabiagba, “This year’s Isese day is successful generally, and we appreciated the support of our Royal Majesty, Oba Aromire, for his royal backing at all times.”

Ba’ale Saheed Adesegun Fakunle, who is Ba’ale of Aiyetoro, commended the financial support of Hon. Fatai Adekunle Ayoola, the executive chairman of Ajeromi-Ifelodun Local Government, towards the successful hosting of Isese Day.

He praised the entire Oje Apapa Parapo for their relentless efforts in making the year 2022 Isese Day successful in Ajegunle, adding that all Oje families represented their clan appropriately in the course of ensuring that customs and traditions among the Oje Apapa Parapo are sustained for posterity.

Information gathered from sources revealed that His Royal Majesty, Oba AbdulFatai Aremu Oyeyimika Aromire, the Ojora of Ijora and Iganmu Kingdom, and Hon. Fatai Adekunle Ayoola, executive chairman of Ajeromi-Ifelodun Local Government, provided security agencies that ensured the safety of lives and properties during the egungun outing on Sunday.